Who is NATALIE MINH?

Natalie Minh is an internationally published Fitness Model and Fitness Photographer.  She is a Vietnamese-American born in Houston, Texas USA in 1980. She was raised in the Metro Detroit area and excelled in school and sport. She graduated with honors and was accepted to study at several prestigious universities. In sport, her achievements included 2 singles position in tennis, 3 years of martial arts, and swimming. She was also active in Student Council (class president Sophomore year), Student Representative on the school district Board of Directors, elected Student Council President on the county level, community service activities with the student Rotary Club, National Honor Society, listed 3 consecutive years in the High School Students Who’s Who directory, Drama Club, and earned her Nail Technician license. Other hobbies included drawing, reading, and computer programming.

In University, she earned a BBA with honors from the University of Michigan (U of M) while working full time as an IT analyst in the automotive industry, running an Ebay PowerSeller online shop, and at one point her own manicure business. Although she had a strong interest in computers and IT analysis, Natalie believed that applying her analytical talents in a broader business sense would be far more challenging and rewarding. Immediately following graduation from U of M’s bachelor’s program, she enrolled in U of M’s dual masters’ degree program – MBA and Masters of Science in Finance. She earned both masters’ degrees in 2.5 years. Upon graduation she changed careers from IT to Finance.

While working for a Fortune 100 financial services company in 2007, Natalie took advantage of an opportunity to live in Brussels, Belgium for 3 years as an expatriate in the company’s European Finance Center. This decision was a life changing event for her. Natalie dropped everything in Detroit, moved to Brussels by herself, and decided to accomplish some new goals for 2008 specifically – a physical goal. The first thing Natalie did after moving to Europe was to enroll in a gym, hire a trainer, and sign up for a physique competition.

For the next five months, Natalie learned to eat, breathe, and live the competition prep regimen. She extensively researched publications such as Oxygen magazine, bodybuilding.com’s SuperSite, and the Eat Clean Diet by Tosca Reno and slowly started to implement the principles of clean eating and living. Her mantra during this time was “How do you eat an elephant? One bite at a time”. In five short months, she tightened up her program, took progress photos, and educated herself on what was diet & exercise fact or fiction.

The hard work paid off when in April 2008 she won the WNSO FAME European Fitness Model Championship, 2nd place in Bikini Model, and received the invitation to compete at the WNSO 2008 World Championships in Toronto. She also won a modeling contract with W Fitness Models, the premier fitness modeling agency in London and was featured athlete in the September 2008 issue of Muscle & Fitness UK magazine.

Other activities that Natalie currently enjoys are indoor wall climbing, mountain biking, and aerobics. In her spare time you will find her making new friends in Brussels and discovering new cities across Europe.

Keep your eyes on Natalie Minh as she is determined to make her mark on the fitness industry.

My Fitness Program used for the European Championships 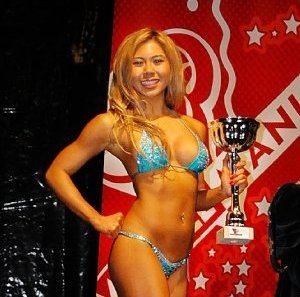 My Fitness Program used for the European Championships

This is a blog dated from February 2008: I am training for a fitness competition in April and a few people have asked,...