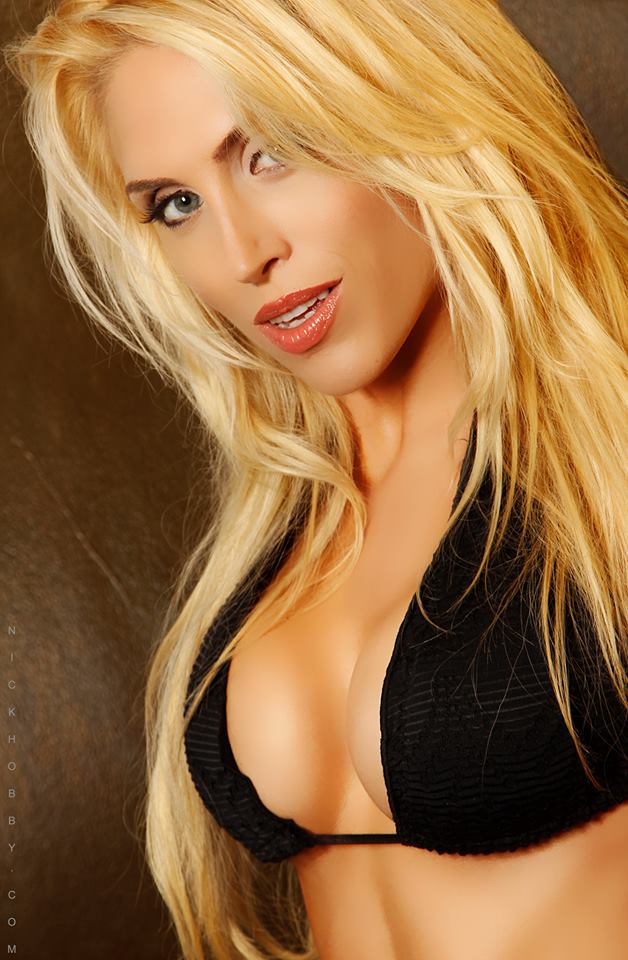 Anna Bielkheden has worked steadily as a makeup artist for the past 15 years. She started out in Stockholm, Sweden, at the early age of 16.

Even though she was the youngest of her class, her teacher convinced her that she’d get work based on her talent – and she did. While still in makeup school she did her first fashion show and began booking covers and editorials. One thing led to another and she quickly built an impressive resume and portfolio. Anna had her heart set on Los Angeles since she could walk, and when she finally got the opportunity to make the move, she packed her bags and her family and left to follow her dreams.

With the advantage of speaking fluent Swedish, she started working for Swedish media shooting news material and filming television shows in the Los Angeles area.

1. How did you get started doing makeup for the fitness industry?

Well, actually it’s been like a silver lining throughout my entire career. The first magazine gig I landed back in 2000 was for a Swedish magazine called The Sportsguide, followed by Fitness Magazine and things like that. But they used regular fashion models back then and it was always fitness clothing editorials. It wasn’t until I worked on a “get in shape” reality show in Los Angeles that I randomly connected with Pavel and from there started doing hardcore fitness shoots for American media.

2. You own a gym to, a Barry’s Bootcamp franchise as well as being agency represented fitness model. Do you think that being an athlete yourself and having your own experience in front of the camera has helped you become a better makeup artist for this particular industry?

Absolutely! Since I do the same thing that my models do, live and breathe fitness and know what it’s like to work hard to deliver great results and pictures – it helps me to connect with the models and build a certain trust. I also believe I have a vast experience knowing what works for this industry in terms of looks, knowing what agencies and clients want. Through working with Pavel I have learned so much in terms of lighting and adjusting the makeup to make the clients face pop even though the focus is on the body, and things like that. He’s a genius, I’m very lucky to have gotten the opportunity to work with him as much as I have. 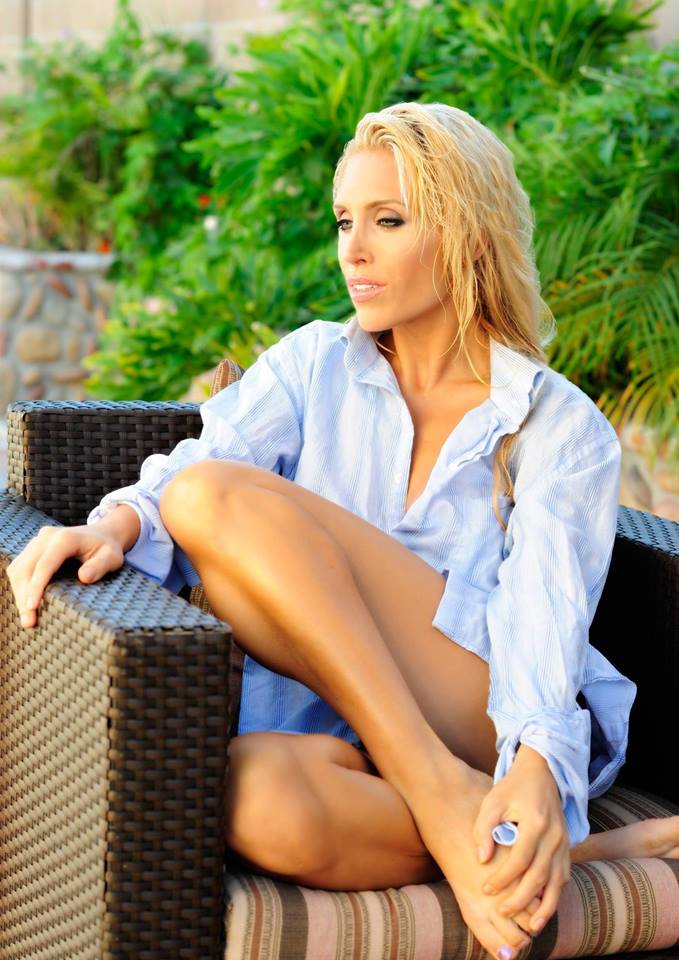 3. Do you have any pointers for competition makeup?

Always hire a makeup artist, unless you are one yourself. They know exactly what looks good on stage, and it’s usually a lot more than you think you need – just like with the tanning. It’s basically “show girl” makeup, big fake lashes, lots of smokey eye and lots of flowing hair – it can be pretty taxing to make sure it all looks perfect on top of the stress you have when competing, so I really recommend having someone do it for you – it can really make or break your placing.

Not to mention the difficulty of matching your face to your body, to some degree. I like just keeping the face spray tan free and rather gradually blend it in with sun powder and a good covering base that’s not too dark but still works with the body – you don’t want to look like someone cut and pasted your face onto your body!

4. What’s it like working with athletes vs. fashion models or TV-personalities?

VERY different. And usually a lot easier, as fitness people generally are more “regular folks” that don’t have as much of an ego or try to control the direction of the shoot or the styling as much.

Having worked a lot in reality TV I can tell you that there are some wild characters out there….

5. What are your favorite fitness publications?

FitnessRX, Muscle&Fitness Hers, Oxygen and of course NM lifestyle magazine 😉

6. Plans for the future?

I want to work more doing mainstream covers and editorials like that of Shape magazine and Oxygen. For creative variety I’m also planning on branching more into fashion and I have some covers planned with a fellow celebrity stylist, and an Elle magazine cover is a goal in the near future. 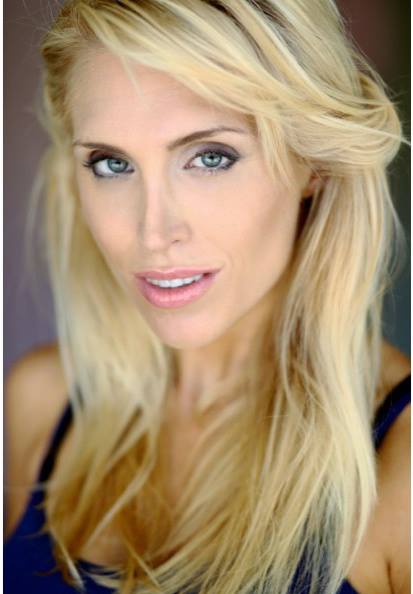 “Being a makeup artist is like having the faces of the world as your canvas, and the skill to make them all beautiful” – Anna Bjelkheden at the age of 15. Her passion for the power of makeup is what has taken Anna so far within the makeup industry. Her passion to help people and to change things into the positive is what has made her so good at Makeup. Anna was born in Stockholm Sweden, her mother being Inger Löfvander a top tier Psychologist and her father being Ulf G. Åhslund a world renown Classical guitar player. At an early age Anna showed signs that she one day would come to master the art of colors in one way or another. Her father had bought her a big set of color pencils as he himself also dabbled in the art of painting, he had left the colored pencils in a messy order only to find the perfectly ordered in the professional way of sorting colors, sorted by none other than his 5 year old daughter Anna.

When Anna grew older she became the one person her friends would come to for their makeup before going to school events and this is just a few years prior to her starting her professional education and career. In 1998 she would decide to join Makeup Institute a now very well established brand in Europe both for education and also for the sales of makeup. The owner of Makeup Institute saw the talent Anna had for makeup at only 16, and used her to inspire and teach his other students as she was always the one selected to demonstrate instructions.

While still undergoing her education Anna was offered work within makeup for all known Swedish versions of American magazines. At only 17 years old she was recognized for her talent by top Swedish photographer Robert Johansson, well recognized for shooting stars like Beyoncé, and started working side by side with him for various shoots including major magazines like Sportsguiden and Slitz.

After 8 years of doing makeup in Sweden she decided to follow her dream of teaching and pursuing makeup in California, and moved to Los Angeles in 2008 to start a makeup school. She hired the best teachers in the industry, including Jeff Siegel, current head of makeup at Paul Mitchell in NY. She successfully educated and graduated many students whom she still keeps close contact with and brings on set to jobs for assistance. 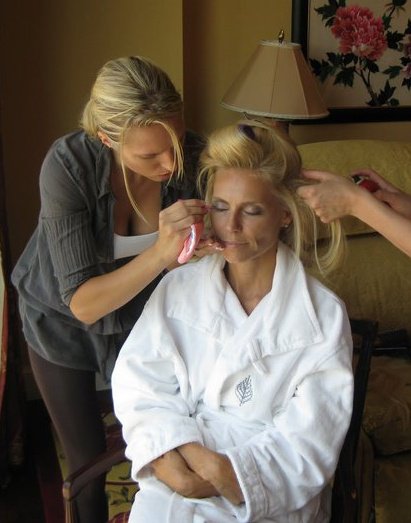 During her years in Los Angeles she’s been very successful in building a broad net of connections both with Swedish and American media, and has been the makeup artist of choice for almost all of the big Swedish television productions that has filmed for the past years in Los Angeles. Among these are “Swedish Hollywood Wives”, “In Shape with Anna Anka” and “The Superstylist” with Swedish Top Model host Jonas Hallberg, internationally recognized stylist to stars like Jessica Biel and Giselle Bunchen, for magazines like Vogue and Elle.

Anna has appeared numerous times on the shows herself, performing makeup for make overs etc.

In addition to television work, she is also the main makeup artist of Los Angeles based Swedish photographer Thomas Engström, who shoots various print media and TV-promotions for Norway and Sweden concerning mainly the Scandinavian celebrities based in California.

Aside from her television career, she has with her personal passion for fitness and health become specialized in fitness shoots and has since 2011 been the in house makeup artist and wardrobe stylist for top photographer Pavel Ythjall. During her time with Pavel she helped put together styling for his work with 50 cent’s recent fitness book, and worked on big campaigns like Isport Headphones and Better Bodies clothing, as well as spreads for Flex Magazine, Muscle&Fitness and countless book covers and posters for the successful diet brand Fighterdiet.

Anna is currently signed with Victoria Pressly Celebrity Agency and is expecting a bright future working alongside the best in fashion, fitness and television.

Gypsy Jetsetter: “Your Airline’s Either Got It Or It Hasn’t” – Virgin Atlantic 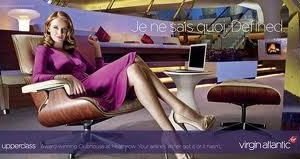 Gypsy Jetsetter: “Your Airline’s Either Got It Or It Hasn’t” – Virgin Atlantic

Airlines around the world have been struggling in the last few years with declining ticket sales and have searched for new ways...